Since I last wrote about our San Diego purchases we did - as predicted - sell out of certain titles, you can still call in and reserve copies of J. Scott Campbell's Monster Green, Blue Beauties, White Hot and Marvelous all of which will be heading our way soon, along with other great books served up by our pal Alberto of Brandstudio Press, you know they'll be worth the wait.


Still, as the sages recommend one should never dwell too long in the past or the future because the present is the only reality - it also sounds like a gift, PRESENT -so make the most of this amazing selection of books which - in the words of Fat Boy Slim - are right here, right now, right here, right now... 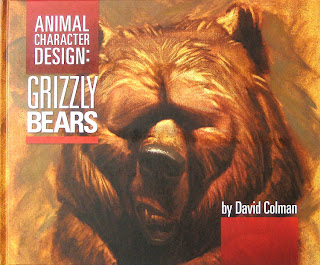 DAVID COLMAN: ANIMAL CHARACTER DESIGN: GRIZZILY BEARS
HC 68pp Color, Black + White
David Colman
Emmy award winning animator David Colman is a passionate man on a mission, that mission being he wants you to have fun drawing animals. And to help David is the author of one of our best selling books The Art of Animal Character Design and now he's added this new volume about drawing Bears.
David's particular strength is imbuing animals with characteristics and expressions which bring a dramatic element to the image be it of a cute cub or a fearsome adult.
The book features some of the popular images from his successful gallery show at the Galerie Daniel Maghen here in Paris.

So sticking with the theme of our furry friends we have a selection of books by David's unfurry friend, animal artist, Joe Weatherly. 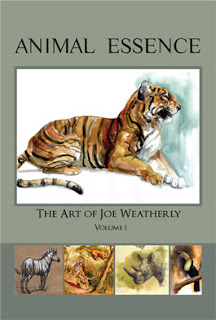 In contrast to David's favored technique of taking an animal's essence and exaggerating it to achieve amazing caricatures his friend Joe finds an animal's essence and seeks to represent that.
As such Joe is really a fine artist but in our store dedicated to genre illustration and its exponents we're happy to carry his books, of which this coffee table book of his art represents a trophy worthy of stuffing, mounting, whatever and putting on your bookshelf. 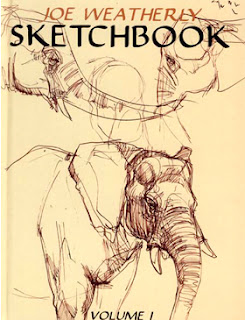 JOE WEATHERLY SKETCHBOOK
HC 108pp Color, Balck + White
Joe Weatherly
Like every artist Joe doesn't go anywhere without a sketchbook, which begs the question what are so many wild animals, dinosaur skeletons and nude people doing out and about in southern California, Joe? 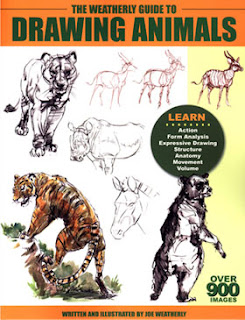 JOE WEATHERLY: THE WEATHERLY GUIDE TO DRAWING ANIMALS
SC 166pp Black + White
Joe Weatherly
This is an indispensable instructional guide for the would be animal artist, but it isn't just a collection of dry exercises to hone your craft, it's full of exciting illustrations, over 900 of them.
Particularly good are Joe's studies of animal anatomy and skeletal construction.
OK having met Joe friend of David meet Michael Hampton friend of Joe, and like Joe an excellent instructor for grounding would be artists in the best way of approaching illustrating. 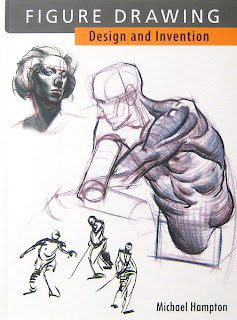 MICHAEL HAMPTON: FIGURE DRAWING DESIGN & INVENTION
SC 235pp Color, Black + White
Michael Hampton
Standing comparison to the wonderful series of instructional books by George Bridgman, Michael uses clean precise prose to accompany equally clean and crisp illustrations to explain the processes required to create realistic and representative images of the human form.
This book is so good it's little wonder that this book has become an online best seller for its author.
Let's change the mood, all these instructional books -  great though they be - are making us sound like a back to school shop, here comes some fun. 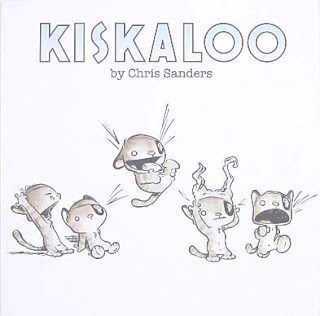 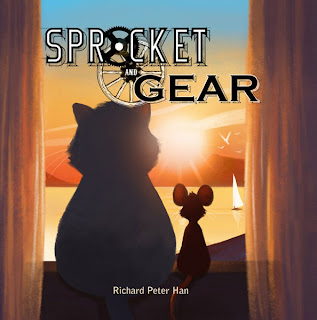 RICHARD PETER HAN: SPROKET & GEAR
SC 60pp Color, Black + White
Richard Peter Han
Sprocket and Gear are the creation of gaming designer Peter Han, they're an oddball couple being a Cat and a Mouse, who share both the space of an inventor and his knack for designing and making stuff.
Pete's graphic designs are top notch, the book features an 18page color comic strip, as well as development art and character studies. 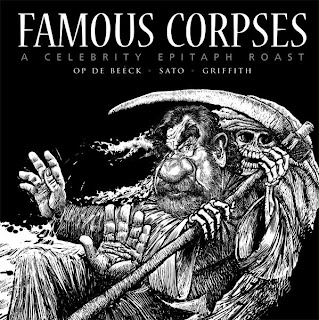 OP DE BEECK, SATO, GRIFFITH: FAMOUS CORPSES
HC 112pp Black + White
Art2books
Death, where is thy sting? The Reaper doesn't seem so grim in this collection  of wonderful caricatures by Jan Op De Beek - see you're laughing already - accompanying drawings by Emi Sato and hilarious text by the irreverent Danielle Griffith of famous folks recently departed.
We can be grateful the march of time overtook several of these characters both for the material they provide to this book but also because the world is that tiny bit better off without them. 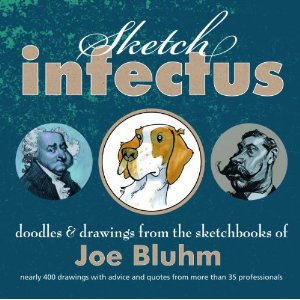 JOE BLUHM: SKETCHINFECTUS
HC 80pp Color, Black + White
Art Squared
Multi talented Joe Bluhm can draw just about anything and he can shake up his style to suit the subject as required, he was getting pigeonholed as a caricature artist because he does them so well but he's does story boarding and aniamtion design as well!
Among the many reasons to be grateful to Joe is this neat package of 400 illustrations and yes many of them are caricatures, is beautifully produced and he was instrumental in getting Famous Corpses together. 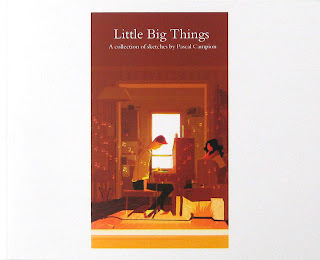 PASCAL CAMPION: LITTLE BIG THINGS
SC 104pp Color
Brandstudio Press
That Pascal Campion is enjoying life is evident from the personal pieces reflecting the domestic bliss he has with his partner and their children and in his whimsical pieces which feature the cutest animals imaginable having some noisey fun.
How he finds time for the domestic bliss in these pictures beats us because he appears to be one of the busiest people in the animation and illustration business!
We have his earlier books and an impressive selection of prints by this master of form, light and color.
Pascal is like a modern Norman Rockwell given the feel good factor he invokes in the viewer. 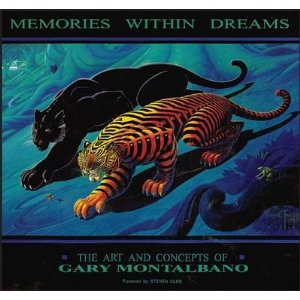 GARY MONTALBANO: MEMORIES WITHIN DREAMS
SC 160pp Color, Black + White
Gary Montalbano
Imagine Roger Dean and Metal Hurlant's Philippe Caza collaborating on a science fiction fantasy project and you are some of the way to getting an idea of what Gary's work is like.
One could be forgiven for thinking Gary was one of the best designers in the business from back in the 80s he so assuredly illustrates in a retro futuristic style.
As a free lance designer Gary has worked for most of the major film and animation studios, one can't help thinking the design team behind the hugely successful and impressive looking Avatar had a copy or two of this book lying around the studio. 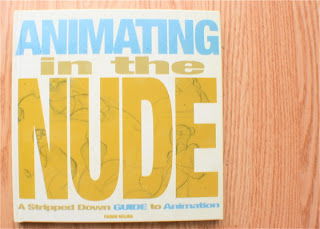 Fabian Molina: Animating In THE NUDE
HC 112pp Color, Black + White
Fabian Molina
Yeah don't expect a fancy bit of red wood when you buy this book; trying to find a nicer image of it proved beyond my usually limitless patience!
So gratuitous wood shot aside this is a great looking book by a very talented animator.
A book any aspiring animator able to read English should invest in, as Fabian shares his professional tips gleaned over hard years of trial and error so you can make immediate headway.
OK, so you may not get a nice bit of red wood with each book but you do get a signed copy complete with a neat little sketch! 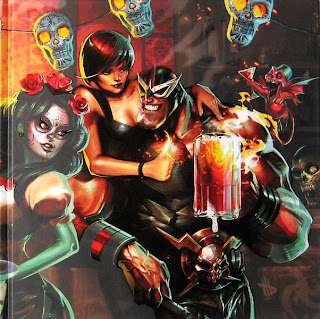 DAVE WILKINS: EL ZOMBO
HC 80pp Color, Black + White
Dave Wilkins
We don't have any say over what artists chose to charge us for their lovingly crafted books and so there's no rhyme or reason to explain why a soft cover at 20 pages is more than a hard cover of 80.
Anyway I digress but this book is great value for money, super production values enhance 3 comic stories and scores of sketches by talented artists introducing us to the Mescal soaked world of teak tough zombie hombre, the superbly attired Lucha Libre, El Zombo!
Posted by PULP'S ART at 10:02 AM

Some of our favorite websites